Once in awhile, a series of events align just right so that something radically new becomes possible. Scientists define these transformations as divergent evolution: the process by which selection sifts through useful accidents in a dynamical system to create new beings, capable of doing new things that previous species could not.

The SMBX was born on just such a wager — namely, that a new law, combined with a new set of technologies, and driven by a powerful social demand had now created the opportunity for something radically new in finance. That not only had these events made possible a new model of finance, but that a new way of ‘doing’ finance and ‘being’ financial in a new and better financial system was now beginning to take shape.

To help effect this evolution is why we built the SMBX.

To some this might sound like hyperbole. But if you believe that much of our financial system is outdated, and want to believe that a new model of finance is possible, keep reading and decide for yourself.

The Conditions for Evolution: a Law, Technology, and Product/Market Fit

Its Title III of the JOBS Act (aka Regulation Crowdfunding).

Recently a new law called Title III went into effect. Title III now allows small businesses to also raise their capital from the general public. Before they couldn’t. Now they can. This means a small business public marketplace is now possible, at least legally-speaking.
What are these new technologies?

In recent years we’ve seen a number of new technologies in automation making new things in finance possible. Discussing them all here would take too much time and anyways is unnecessary. But let’s briefly consider blockchain and blockchain-based technologies –especially smart contracts.

There’s a lot of talk these days about blockchain and smart contracts, and yes, some of it’s overhyped. But the promise of the technology is not. And at the SMBX we’ve spent the last two years making this promise production-ready.

What’s cool about smart contracts is they allow for highly-customizable creations of transparent, secure, self-executing peer-to-peer financial transactions. This means that today smart contracts give us an automated technology capable of accomplishing what we’ve previously always needed bankers and other financial intermediaries to do.

The commonly used legacy financial term “financial intermediary” conveys that someone — a banker, a broker, a dealer, whoever — is perceived to be necessary to “inter-mediate”, or stand between (inter-) two or more persons wanting to perform a financial transaction to help them facilitate (-mediate) that transaction.

Before we even wrote our first line of code, we conducted in-depth research on people’s shifting investing behaviors, including over one thousand meetings with millennial investors. What did we learn? We learned that millennials do increasingly have investable wealth. It also turns out they want to invest their money. And they want a good return on their investments. But time and again we found that millennials are just not that stoked about investing in British Petroleum or Coca-Cola, i.e. in stocks and bonds of legacy corporations. Instead, we learned millennials want the ability to invest in businesses they care about, identify with, or with which they have some sort of emotional or social connection — and they want and expect a return on these investments.

Does this sound like you? If you’re still not sure, ask yourself two questions:

1. Would I rather invest in local businesses than large corporations?

Think of your three favorite local businesses: if you could invest in these three businesses, and match or get an even better return on these investment than you would by buying a bond or a share issued by a large corporation, for example British Petroleum or Coca-Cola, would you?

This may sound like an odd question. People usually think about banks as the ones that fund people. But actually the opposite is true: when we store our unused money as deposits in our bank account, we are effectively funding that bank. How so? Let us consider this in seven easy steps.

It’s no secret that this is generally how banks work — after all, this is their business model. In fact most of us have come to accept that in every scenario it’s the bank, not us, who gets to keep the profits when the bank lends our money to a small business owner, who then makes interest payments on the loan, which then generates profits for the bank. It’s hardly fair. We know this. But so what? This problem has always seemed too big to solve.

But what if a new law was combined with a new technology that made possible a new species of platform, so that now you could directly lend your unused money to small businesses –and so that now you, not the bank, were able to keep the profits from interest payments made on a small business loan? Given the choice of letting the bank keep the profits from lending out your money, or you keeping the profits made from lending out your money, wouldn’t you rather keep these profits?

So would you rather invest in local businesses than large corporations? And are you tired of funding your bank?

And because it’s a public exchange, it has both a primary market and a secondary market.

Why did we build a primary market?

For small businesses: a small business owner who needs to raise between $100K-$1M to grow her business no longer needs to raise money from the bank. Instead, she can come to the SMBX and work with our underwriting team to issue a bond to the general public — her investors will be her company’s existing customers, social media followers, or maybe people who are just hanging around the platform and want to invest in local small businesses. We believe that in the future, small businesses will no longer be taking out loans from a bank. Instead they’ll issue Small Business Bonds™ on the SMBX (bonds are basically just loans which can be bought and sold).

For investors: now an investor who wants to earn profits on his unused income will no longer need to store his money in a zero-interest bank account, but instead will store it in a portfolio of bonds issued by small businesses on the SMBX. He’ll get a good rate of return, while also supporting the evolution of a new financial system — one that he’s built, one that he owns, one that creates the kind of world he wants to live in.

And why did we build a secondary market?

For investors: When an investor has bought a Small Business Bond™, what if for some reason he wants to exit his investment? He needs liquidity. He needs a place to sell this bond.

The secondary market is the place where investors can buy and sell their Small Business Bonds™.

The SMBX is a smart contract-driven mobile app that allows people to buy and sell small business financial securities –especially Small Business Bonds, so that now their unused money can be lent out to local small businesses as they wish, and now we the people, instead of our banks, can keep the profits earned. This means that when people use the SMBX, they’re creating wealth for themselves while also helping to build a new and better world –a world populated by small businesses, a world supporting middle class prosperity, a regaining of purchasing power, a world where local businesses get the funding they need to grow, a wealth of the commons, and all while earning a good return on their unused money.

It’s a new world. A better world. A higher evolved world. A world where new things in and with finance have become possible.

So yes, at the SMBX we believe that finance is evolving.

We invite you to Join the Evolution.

What's new on our latest app update, 1.2.0: 1) displaying your investment activity to the public, and 2) sharing an offering via email or social media. 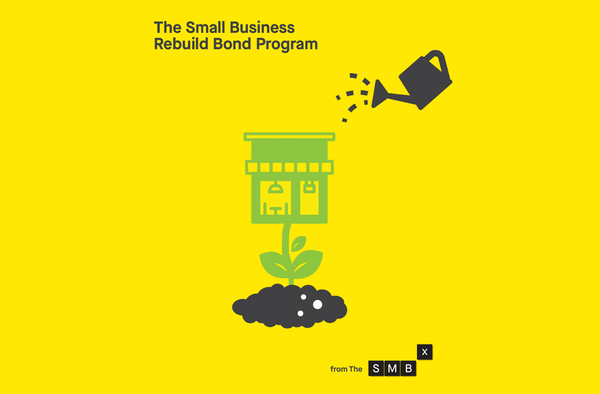 The Small Business Rebuild Bond Program was created by The SMBX to offset the adverse impact of the coronavirus. For $0, small businesses can raise up to $100k with their community by issuing Small Business Bonds™.